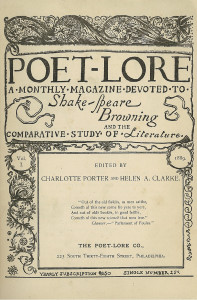 Founded in January 1889, Poet Lore is the nation’s oldest poetry journal. It has published world-famous poets and new writers side by side throughout its long history. Charlotte Porter and Helen Clarke, two progressive young Shakespeare scholars, launched Poet Lore as a forum on “Shakespeare, Browning, and the Comparative Study of Literature” but soon sought out the original work of living writers.

Early issues of the magazine featured poetry by such luminaries as Rabindranath Tagore, Frederic Mistral, Rainer Maria Rilke, Stéphane Mallarmé, and Paul Verlaine. Poems by Sara Teasdale, Emma Lazarus, and many other women poets appeared in Poet Lore’s pages, including work by Harriet Monroe, who went on to establish Poetry magazine in 1912.

Porter and Clarke, who were life partners as well as co-editors, founded Poet Lore in Philadelphia but two years later moved to Boston, where the journal remained until 1976, when it was purchased by Heldref Publications in Washington, DC. For the past 25 years, Poet Lore has been a publication of The Writer’s Center, an independent literary non-profit in Bethesda, Maryland.

Visit us on Facebook for information on ongoing events and news.